Here’s some background information. We actually have TWO sets of judges who select the OVERALL TOP 10 cards every quarter. Our primary judge is a librarian at a children's library, as well as a story teller to grade school children across the state. After narrowing down the 50+ cards to about 15, she calls in her husband for support. If we’re unable to connect with her, then we work with another set of judges. Our primary contacts has been with us since some of our original events in Chicago. What sparked our connection with them was during our first ever Pledge Allegiance event where we made 149 cards and she had one of the Top 10!! When she’s working on finalizing the Top 10, she calls on her imaginative mother to help out. One consistent factor between the two is that they’re both interested in their communities and they’re both very creative.

For the Q3 2015 judging, we worked with our second set of judges. They were looking among the 35+ final cards. They opened and read every card. Slowly, they began trimming down the finalists. After a while they noticed something similar between the cards. The majority of the messages ended with “Love, Diane.” For you competitive folks who are a bit upset you didn’t make it, we gotta say, “Sorry, we warned you with the On Their Own blog post!” At that time, Diane Kalata had a streak of 4 consecutive quarters with having a card in the Overall Top 10. Then, the last 3 quarters, she had multiple cards in the Top 10.

This past quarter, Diane had her best performance of all time, 5 of the Top 10! That’s EIGHT quarters in a row with at least one of the Top 10 cards. 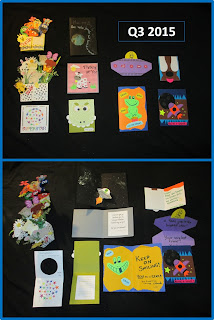 She made the 3D Sesame Street, 3D Animals, Green Monster, Checkered Zebra AND the Superstar card!!

After finalizing the Top 10 this quarter, this set of judges decided that even if one artist should have all 10 of the Top 10, there should be a maximum of 3 by one person.

No matter what guidelines are in place are in the future, we’re thankful that Diane sparked the judges into CHANGING THE RULES. If she makes more cards like these we’re not sure they’ll be able to limit it to 3!!!! 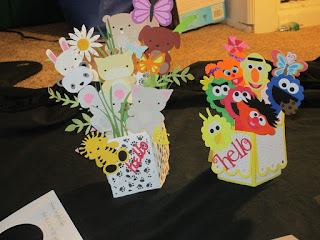