As usual, we’re going to start this blog post off right: being 100% open  and honest. If you look at the bottom of this post, you’ll see the links to our main website, as well as our six different social media accounts. We also have accounts on Pinterest and Snapchat that we don’t use very often. Although our president is pretty active on Twitter, we decided we should probably focus on Instagram and Facebook. With both platforms we can concentrate on posting pictures in our free time and have them show up throughout the day. We can recognize different groups for their participation plus give people ideas for what they could include in their cards. We first started increasing our activity on Instagram in April of 2016. Let’s look at some “Before” and “After” pictures showing how things have progressed. 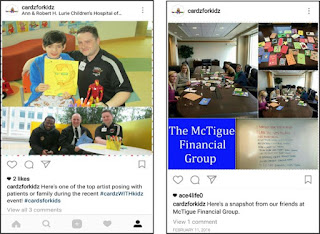 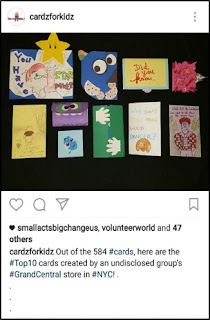 One of the key differences between the “Before” and “After” pictures is the “2 likes” vs. the “2 likes and 47 others.” In addition, the “After” picture is an Instagram post focused on the cards created—not the creators or recipients! One of the main differences is the recent increase in followers on our Instagram account. Now here’s where the honesty comes in. Do you want to know one of the main reasons why? It’s thanks to the “@a_little_helps_a_lot” account: this organization connects cheerleaders who are interested in volunteering and giving back. They’ve been encouraging their followers to get involved with Cardz for Kidz! and make cards. Right after they posted information about how we were going to partner together, we immediately saw an increase in followers and started getting more likes on one of our targeted social media platforms. Actually, they’ve been helping us on both Instagram and Facebook. Here are some of their “Helper Bees” posting on Instagram about making cards: 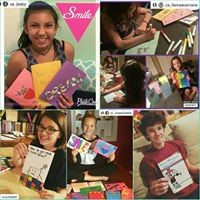 They have also been sharing some of our Facebook posts—specifically the posts where we request for people to make more cards: 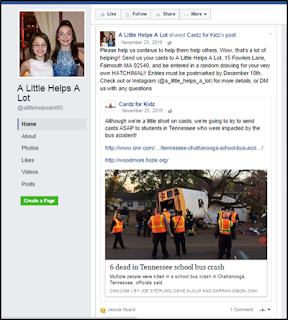 No they haven’t made a world renown number of cards, but YES they have gotten people across the globe to make cards—we’ve even received cards from one of their followers in Australia!! Thanks to this fruitful partnership, we’ve been able to connect with some of their followers, including Bella—who’s made some amazing cards; if Q4 2016 wasn’t already a record-breaking quarter, she’d probably have multiple cards in the OVERALL Top 10! Here are some of her creations: 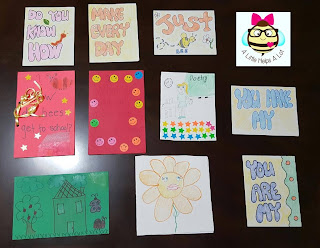 In summary, we’re VERY thankful that our friends at A Little Helps A Lot continue to help us in many different ways. Not only do they encourage their followers to make cards, they pretty much said, “We’re here and we’re CHEERING FOR YOU and the children you reach!” And for that we’re forever thankful.

Once again we have some more honesty for you…..

We were working on some social posts and requesting that people look at the map on our homepage! While working on that Google map, we realized that it’s actually VERY misleading …sorry about that.

First, without background information, you’d simply glance at the legend at the right and assume we simply worked with hospitals then made some shipments to ‘Special Destinations’. When we originally created those labels, we were strictly focsed on pediatric patients at small to midsize hospitals. Unfortunately, unlike other portions of the site (e.g. adding smiles to the map), updating the legend is a bit more difficult. We’ll work with some advisors and we’ll try to update that as soon as we can.

Second, there’s a lot that’s missing! To be “100% open and honest”, there should be WAY more green hearts on the map. For example, yes we have a hospital and a smile in Seattle, but we contacted five other places. Should all those hearts be on there? Then there are other locations alongside the East Coast that we decided to hold off on since we didn’t want to overshadow the locations we currently are partnering with, as well as our special deliveries. But as mentioned in one of our team members Facebook posts, shown below, it can be pretty tough to get in touch with the right person at the hospital, explain Cardz for Kidz!, and get them to confirm they’d like to consistently receive cards.

Finally, what about what we discussed last week with all the special one-time donations when we had the record setting influx of cards in Q4 2016? Based on our numbers, we delivered a total of nearly 1,500 cards between two locations in Ann Arbor, MI, 14 locations in the metro Atlanta area, and six places in Shrevport, LA. To be a bit defensive, we did add one for Shrevport to the map to represent some coverage.

In summary, we’ll always make it clear for you where your cards could go. Not only will there be a smile on the map, but we also have those places listed on our About-Us page and whenever there’s a tragic situation that requires cards, we try to announce it on our social sites before we send them (example below). But in terms of some of the background work trying to get all types of locations to sign on, WE’VE BEEN HIDING a bit. Sorry about that! Now if you tell a friend to visit our site and they claim we only work with hospitals because they saw it on the map, hopefully you can explain!